This relish lasts well in the refrigerator.

Spread it on crusty bread for bush lunches.

Add it to a ploughman’s platter of cheese and salads, and you will have a taste sensation like Branston pickle or sweet chilli sauce never offered!

Top wedges of cold Spanish omlette or Frittata with a dollop of this relish, serve on a wooden board outdoors under a shady tree, and your reputation as a bush cook is assured….

Boil some water and soak the chopped onions in the boiling water for five minutes. Drain.

Finely chop LOTS of garlic. Optional but necessary if you want true oomph…….

Add all the above ingredients to a large, lidded pot, and throw in six cups water, two bay leaves and two dried red chillies. Bring to a gentle boil and dig around to discard the bay leaves, if you can find them. If you leave them in the flavour will be too aromatic….

Add half a cup of sugar, three-quarters cup of white wine vinegar, a teaspoon of salt and a teaspoon of strong, tasty curry powder such as Cartwrights.

Mix three heaped teaspoons of cornflour with a little water to form a smooth paste, then stir the paste into the bean mix and keep stirring until the sauce thickens slightly.
Simmer for aniother ten minutes then take the pot off the heat to cool slightly.
Meanwhile sterilise three large preserving jars with boiling water, drain and fill with the bean relish. Seal with a round of greaseproof paper, and screw tops.

Keep for at least a week in the refrigerator to fully develop the flavours-this last may be harder than it sounds…….. 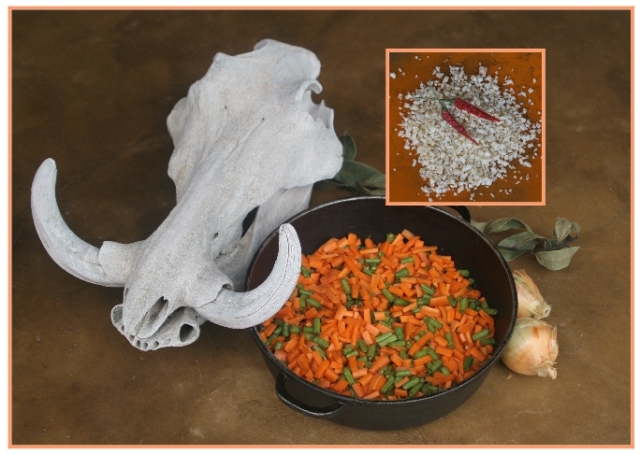