Yesterday, our Australian guests headed through the park back to Chilo Gorge Lodge with Thomas Mutombeni to round off their Zimbabwean safari with a little more luxury at the home base of Chilo Gorge Safari Lodge. We were sad to see them go.

We packed up camp with the able help of staff members Lionel, Peter, Batsi, Victor and Lymon who created a compact load on the trailer…what a team! 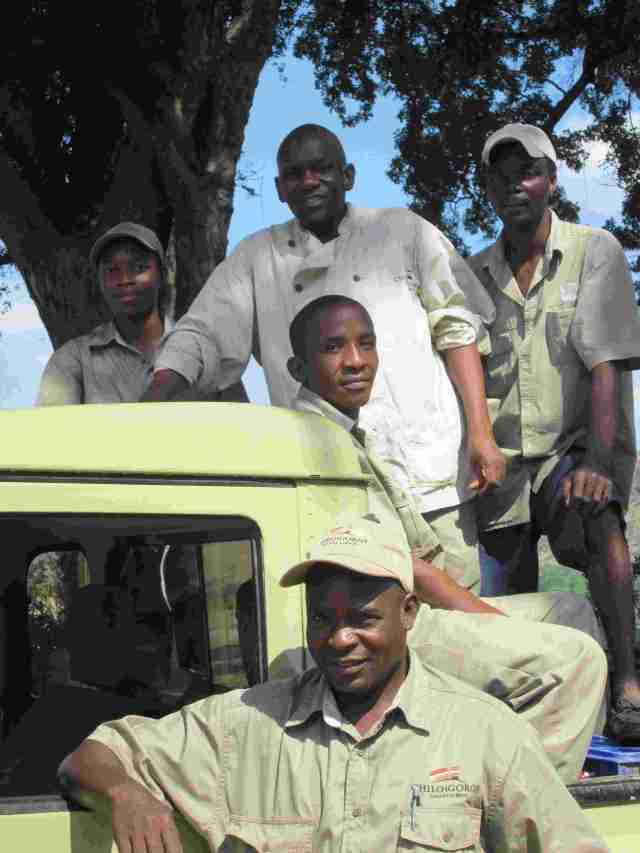 We then had the fun of sharing a close sight of an immense elephant bull wallowing in the thick mud of a small pan behind out camp- and shared that experience with John Laing and his group of South African birders who had arrived, having driven in on their way to view the cliffs and do a round trip to the pans . 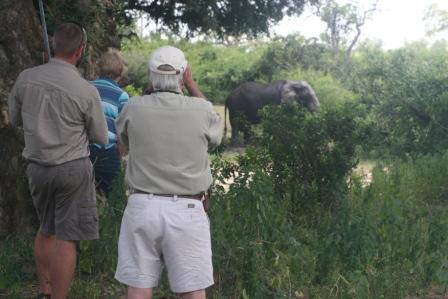 Driving out of the Gonarezhou National Park after bidding sad farewell to the gorgeous scenery at Chilo Gorge tented camp, we were graced with the huge presence of a spectacular bull elephant, a gentle giant who allowed us to invade his space and admire him against the backdrop of the magnificent Chilojo Cliffs. 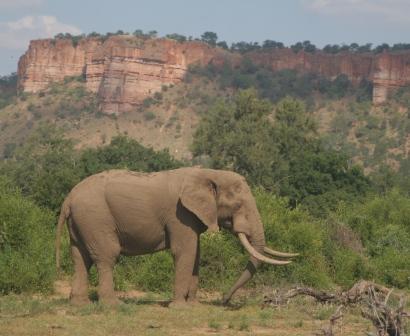 Clive and I spent  a night at Chipinda Pools headquarters with friends Hugo van der Westhuizen of Frankfurt Zoological Society and Ant Kaschula of Gonarezhou Bush camps, and after a braai ( barbeque) and a few drams of good whisky, we retired. But not to sleep! Fruit bats whirred their wings above the tent, and their range of twangs and squeaks,  melodious and raucous by turns, interspersed with the calls of the Barred owls, Giant Eagle owls and intriguing heavy splashes in the river below the tent! About 3 am I was jolted from fitful sleep by the sudden single bark of a baboon, loud and urgent in the tree above our tent where his troop was resting…my first thought was  – leopard! And sure enough as I lay there, came the rasping saw of a close cat – very close….so that I watched for long minutes through the gauze window beside my mattress, expecting to see the slinky shape materialize out of the tree shadows any moment…
The rest of the big males in the aerial baboon troop took up the alarm and punctuated our early hours with yells of anger as the cat moved about, invisible but so real….
Before dawn broke, Woodland kingfishers took up a duet and Ground hornbills began booming from the gigantic dead tree nearby where their family had spent the night. Within ten minutes of first light, sound rang from every tree canopy as woodpeckers, barbets, doves and scrub robins all vied with each other to greet the new day. Joyous sound and such a delight to lie abed with a soft pillow, sleepless but happy in the immersion of senses in this surrounding wilderness. I was not complaining!

Lin Barrie The Save Valley Conservancy stretches along the upper reaches of the great Save River in the south east of Zimbabwe. The Gonarezhou National Park laps against the southern banks of the Save River and between these two nestles the Malilangwe Wildlife Reserve. These three celebrated wildlife areas form part of the Greater Limpopo Transfrontier Conservation Area, (GLTFCA)- a unique wilderness jewel which is home to the “Big Five” (endangered Black and White rhinos, elephants, buffalo, lion, leopard) and the ”Little Six” (Klipspringer, Suni, Duiker, Steenbok, Sharpe's Grysbok and Oribi). Endangered African wild dogs, Cheetah, Brown hyena, Bat-eared foxes and a host of special birds and plants contribute to the immense variety of this ecosystem. Communities around the GLTFCA contribute to innovative partnerships with National Parks and the private sector, forming a sound base on which to manage social, economic and environmental issues. This is home to artist and writer Lin Barrie and her life partner, conservationist Clive Stockil. Expressing her hopes, fears and love for this special ecosystem with oil paints on canvas, Lin Barrie believes that the essence of a landscape, person or animal, can only truly be captured by direct observation. Lin Barrie states: “Through my art, and my writing, I feel an intimate connection with the natural world, and from my extensive field sketches of wild animals, people and landscapes, I create larger works on canvas. Lin's work is in various public and private collections in South Africa, Kenya, Zimbabwe, Australia, England, Canada, Sweden and the United States of America. She is represented by galleries in South Africa, Zimbabwe, England, Kenya and Florida, USA.
View all posts by wineandwilddogs →
This entry was posted in birds, bush camps, Chilo Gorge, chilojo cliffs, conservation, eco-tourism, elephants, gonarezhou national park, great limpopo transfrontier conservation Area, safari, zimbabwe and tagged africa, Chilo Gorge Safari Lodge, chilojo cliffs, conservation, eco-tourism, elephants, environment, GLTFCA, gonarezhou, safari, wildlife, zimbabwe. Bookmark the permalink.