18th April
Kelli has been working with Priscilla Chigariro of Domino Magazine as beauty editor and make up artist. An inspired thought led her to suggest a photoshoot in front of Chilojo Cliffs for the June ‘conservation month’ issue and Priscilla embraced the idea. Zimbabwe Parks and Wildlife Management Authority agreed and all roads led to Chilojo Cliffs yesterday! A long hard day was had by all with a 3 am wake up on the banks of the Runde river, coffee from the kitchen of the well-appointed Chipinda Pools tented camp and gorgeous model named “T ” made up by Kelli by 4 am. Then into the minibus and our own trusty Toyota truck, both packed to the roofs, (and above!), with multiple bags of clothes, clothes rail, accessories, tent poles borrowed hastily from Hugo van der Westhuizen of Frankfurt Zoological Society, camera tripods, chairs and props, food for the road, and last but not least, the creative crew: director Priscilla, fashion editor Kate, make up artist Kelli, photographer Michelle, model “T”, videographer Tinashe, volunteer male model Isaac, driver Ronnie, guides Clive and myself.

Priscilla in the dawn light 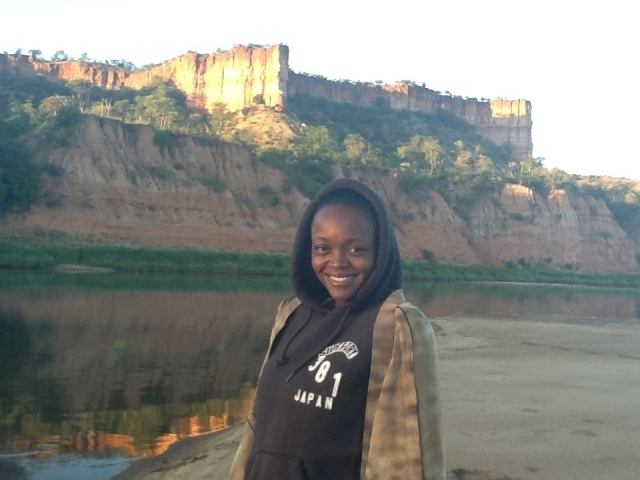 Dawn saw us at Chilojo Picnic Site, at the base of the cliffs. The resident bull hippo was annoyed at our tumultuous arrival on ‘his’ stretch of beach and yawned angrily , splashing and tossing his head in the cool water of his river as we toted multiple bags and clothes onto the sand and began to set up the first shoot. Clive stood by with weapon, just in case, and we tried to give the river horse as much space as we could!

But of course the show had to go on, and luckily the bull calmed down, perhaps even enjoying all the unusual action unfolding on the sand! Cameras clicking, lights flashing, fast changes and touch-ups of lips and hair, video rolling, set-ups of stage props – this was all the intense, hard work that goes into creating a few perfect images for a quality fashion shoot, with the rising sun turning the towering sandstone cliffs every glorious shade of pink and red and highlighting the white scat of a hyena whose tracks led across the sand…

Knowing the speed with which the gentle sun would become a searing mid-morning blaze, Kelli sheltered beneath a wide-brimmed hat and behind dark glasses.

A lone wildebeest came to drink way downstream from us and we heard the distant rumble of a lion. White fronted beeeaters wheeled and twittered above us, with occasional fly-pasts of Brown-headed parrots, while “T” was made up in various out-of- Africa looks, using great props such as belts and bags from Johnstones Saddlery and the simple seed-bead necklaces that the ladies make and sell at the Chipinda Pools reception.
The light fast turned bright enough to chase us from the sand, to hide in the shade of the gigantic Cordyla (wild mango) tree at the picnic site and enjoy our lunch. Thomas Mutombeni and Ian Poynton from Chilo Gorge Safari Lodge passed by, enjoying a game drive, and were most surprised to meet this creative crew in the wilderness that is Gonarezhou!

What a magnificent spectacle the Chilojo Cliffs are…… 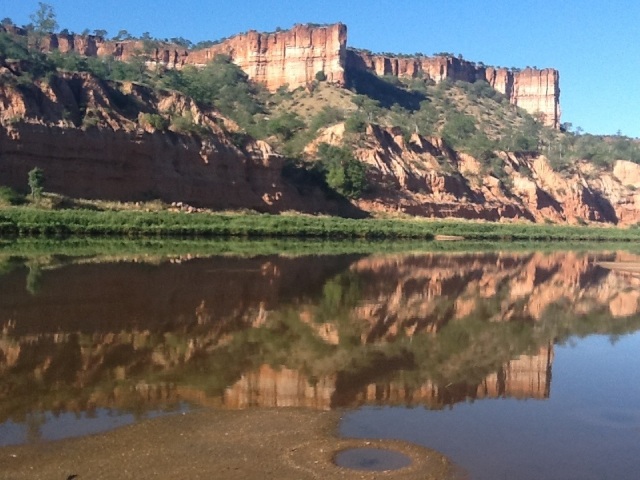 On our way to the viewpoint at the top of the cliffs we forded the Runde river in our Toyota, forsaking the clumsy minibus for a water-worthy vehicle!
Of course we had to introduce our crew to the delights of wading and bathing in the Runde river and they become so entranced with this ‘cool’ activity that it was unanimously decided to do two shoots in the river! Numerous White- backed vultures bathed further downstream, while we kept to the shallow, hopefully crocodile-free water, and watched from a water- level perspective as the crew created some powerful images of “T” in the river. After videoing the water shoot, Tinashe even managed to sneak up for some reality footage of a flock of wary Egyptian geese .

Dried off and refreshed , we crossed the deep sand of the river bed and drove through large herds of impala and wildebeeste up to the Chilojo Cliffs viewpoint, Tinashe perched all the while on the roof, his preferred position for a unique video perspective. We passed a herd of cow elephants at some speed, giving him no chance to video them, much to his dismay, since they had young calves at heel and looked cheeky! Discretion was definitely the better part of valour in that situation! No footage, sorry Tinashe.
Predictably, all jaws dropped when we arrived at the top of the cliffs and walked out to the viewpoint, on the edge of the precipice with views forever……
Make- up was redone , sets laid out and model ” T” swung into professional mode, reclining in a sumptuous boudoir while the resident Black eagles (Verraux’s eagles) soared overhead. 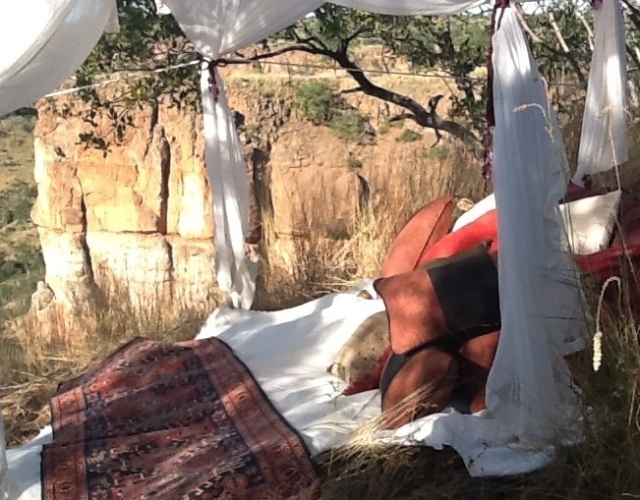 She was then posed on the edge of the precipice in a glorious wedding dress, to take full advantage of the late afternoon glow. The Black eagle who was now perched on the Sentinel pinnacle nearby, watching us, seemingly impressed by this ethereal figure with the long train of her dress flowing out behind her.
As the sun began to desert us, Kate posed “T” in simple linen pants against the panoramic view. Down her naked back hung the exquisite ‘Safari’ necklace which Aude and Sieglinde of Our Crystal Passion have created for the Chilo Gorge shop.

our crystal passion jewellery in the chilo gorge shop

The African dusk fell on us fast, a mantle gently obliterating the view below and giving us instead a growing canopy of a million stars.
Squeezing all bodies inside the overflowing vehicle, we wound a weary but happy way back to camp and bed, our road amazingly lit by the soft rays of a clear half-moon, as we dodged the many nightjars that camouflaged themselves by squatting like rocks on the track, flying up under our wheels at the very last minute as we approached. We were surprised only once by the sudden appearance of three young bull elephants who ran across the road in front of our headlights, and whose squeals of annoyance jolted our sleeping crew wide awake!

I have told you the story behind this fabulous photoshoots, now for the actual spread of images in glorious print, you will need to wait for the June edition of Domino Magazine!

Lin Barrie The Save Valley Conservancy stretches along the upper reaches of the great Save River in the south east of Zimbabwe. The Gonarezhou National Park laps against the southern banks of the Save River and between these two nestles the Malilangwe Wildlife Reserve. These three celebrated wildlife areas form part of the Greater Limpopo Transfrontier Conservation Area, (GLTFCA)- a unique wilderness jewel which is home to the “Big Five” (endangered Black and White rhinos, elephants, buffalo, lion, leopard) and the ”Little Six” (Klipspringer, Suni, Duiker, Steenbok, Sharpe's Grysbok and Oribi). Endangered African wild dogs, Cheetah, Brown hyena, Bat-eared foxes and a host of special birds and plants contribute to the immense variety of this ecosystem. Communities around the GLTFCA contribute to innovative partnerships with National Parks and the private sector, forming a sound base on which to manage social, economic and environmental issues. This is home to artist and writer Lin Barrie and her life partner, conservationist Clive Stockil. Expressing her hopes, fears and love for this special ecosystem with oil paints on canvas, Lin Barrie believes that the essence of a landscape, person or animal, can only truly be captured by direct observation. Lin Barrie states: “Through my art, and my writing, I feel an intimate connection with the natural world, and from my extensive field sketches of wild animals, people and landscapes, I create larger works on canvas. Lin's work is in various public and private collections in South Africa, Kenya, Zimbabwe, Australia, England, Canada, Sweden and the United States of America. She is represented by galleries in South Africa, Zimbabwe, England, Kenya and Florida, USA.
View all posts by wineandwilddogs →
This entry was posted in Africa, art, beauty, chilojo cliffs, culture, fashion, fashion magazine, gonarezhou national park, jewellery, landscape, make up artist, photography, Rivers, safari, Uncategorized, video, zimbabwe and tagged chilojo cliffs, domino magazine, fashion, gonarezhou, hippo, hyena birds, Kelli Barker, landscape, make up artist, our crystal passion, photography, Priscilla Chigariro, river. Bookmark the permalink.