Posted on January 17, 2015 by wineandwilddogs

I am honoured to have my painting chosen for the label of the Pictus III wine produced by Painted Wolf Wines……a delicious vintage for the future to pair with fine food….

This is my painting, “Snare and her brother”, acrylic on canvas…..

Snare and her Brother

How does wine and art benefit African wild dogs?…Read On!…….

In the year of 2008, we spent much of our time observing a pack of African hunting dogs (Lycaon pictus) in the south of the Save Valley Conservancy, Zimbabwe.

Consisting of four adults, four yearlings and, initially, more than nine puppies, this pack had had more than its share of tragedy.

The young female, “Snare”, I so called because when we first saw the adult dogs, in 2007, she had a wire snare tight around her neck, causing a gaping wound. For many months she cleverly evaded our attempts to dart her. Her pain was evident in her haunted eyes…. 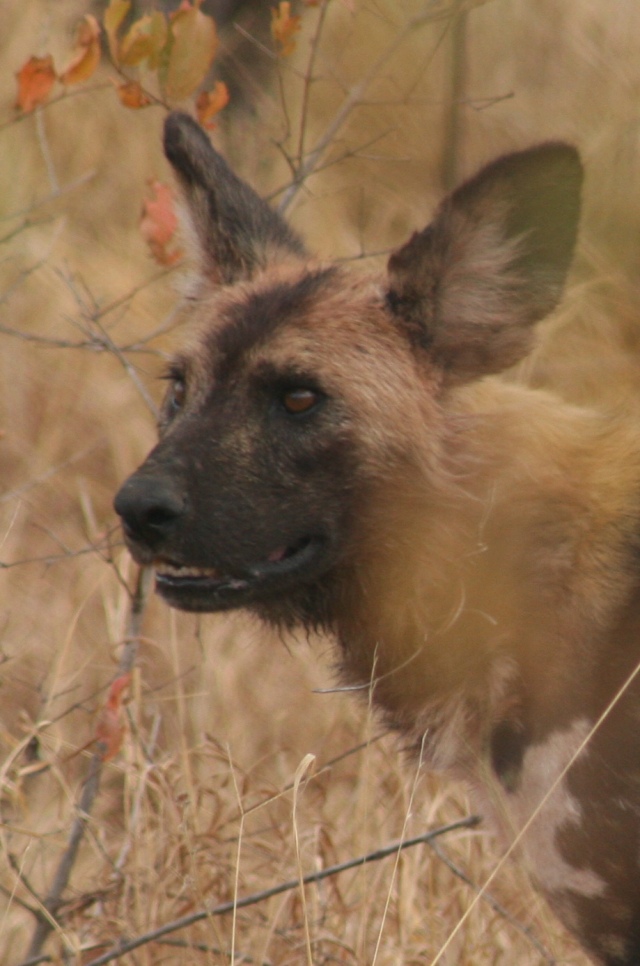 Snare and the horrible wire noose

Snare was difficult to approach since the pack had not yet denned down, still pursuing their nomadic way of life. The Alpha female was visibly pregnant, and obviously hunting for a suitable den site.

All we could do was to keep alert for occasional sightings of the dogs. I truly became discouraged-her wound was so traumatic that it seemed she could not possibly survive if we were unable to remove the vicious wire.

At last, scouts located a den site and we were able to begin to visit the dogs, slowly habituating them to our presence, and discovering that they had at least nine fat pups ensconced in a warthog burrow. Joyful hours were spent watching the new family, but we struggled to coordinate a darting team in the first few days. Each day I would watch poor Snare struggling to breathe and keep up with her pack. She resolutely trailed after them on every hunt, interacting as best she could with her boisterous siblings-always thinner than the rest and staying away from the new babies, unlike her sisters. Her siblings, in turn, cleaned her terrible wound and chaperoned her constantly. ………

She tried hard to jump and play with them before evening hunts, but was always subdued in comparison to their exuberance. 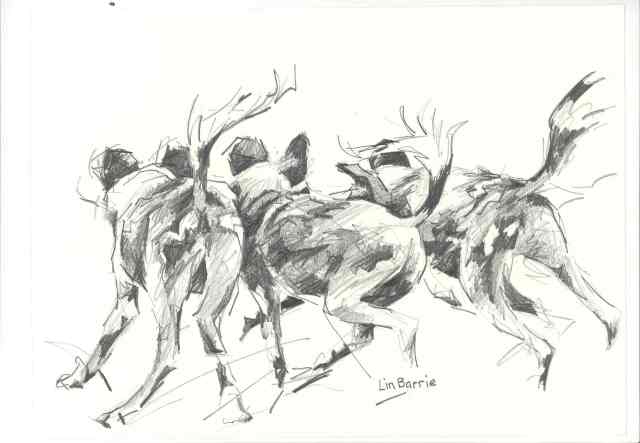 Another tragedy then hit the dogs-a huge python found the burrow, whether by intent or accident we will never know, and, overnight, ate many of the pups-leaving only four whom the Alpha female immediately relocated to another den close by. 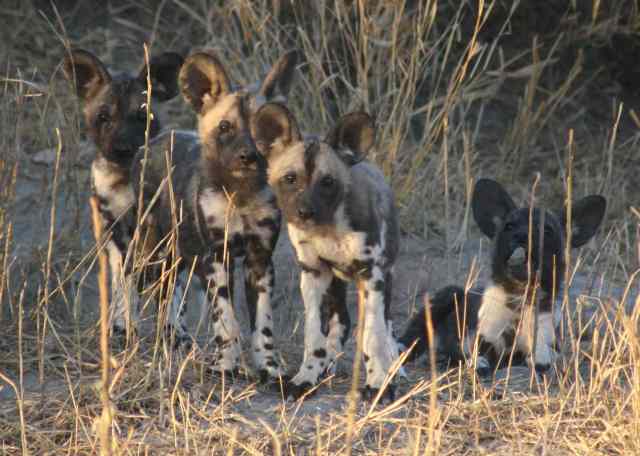 After some aborted attempts to dart Snare, eventually we got lucky and Graham Connear immobilized her. 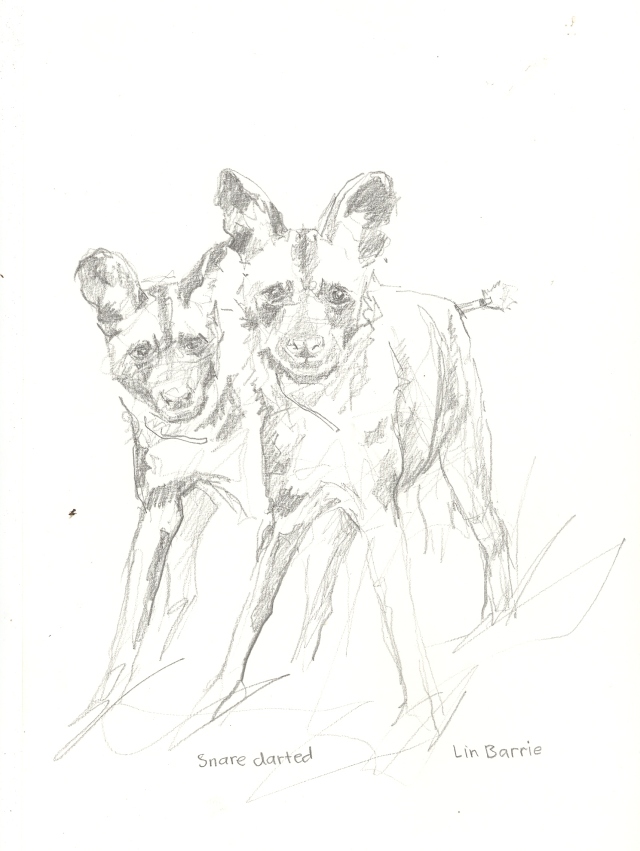 Removing the wire, Reuben, Chief Game Scout from the African Wildlife Conservation Fund found that it had begun to cut into her trachea, thank goodness still a small hole.

Reuben is a master tracker, can find dog tracks where no one else can!

the offending wire is removed at last!

Cleaning the wound as best we could, we administered antibiotics…….and I was honoured to be able to hold her paw, a potent symbol  of function and real beauty belonging to this wild, fast hunter.

after admiring her thick, soft tricolour coat, (which I have used as the backdrop to this Blog of mine!), we left her to recover……. 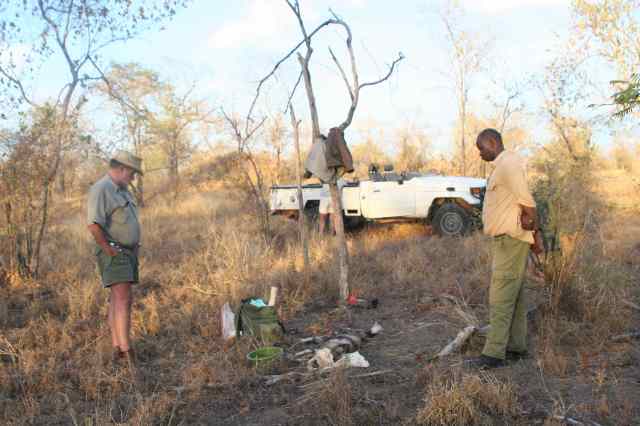 Clive and Rueben wait for the reversal drug to begin working

Over the next few days I saw a transformation that was wondrous to behold- Snare went from strength to strength, daily interacting more and more with the four tiny pups and hunting enthusiastically with her pack. Snare became an active hunter again! The pups would eagerly wait her return from a hunt…… 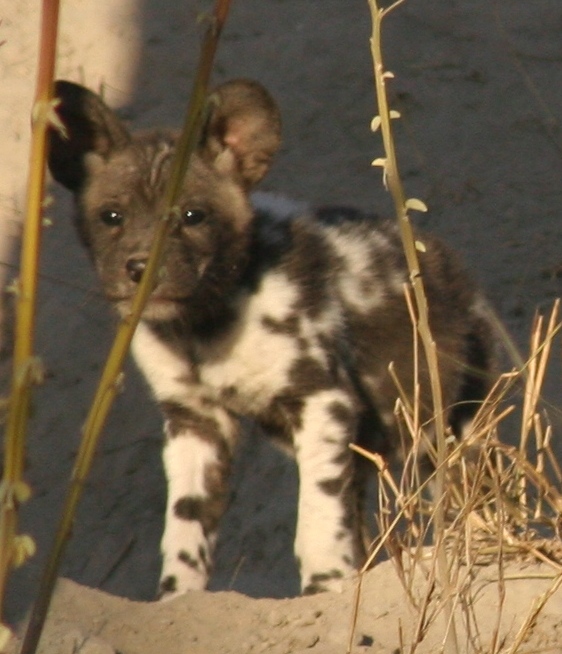 Snare was a new animal, the breath still faintly whistling through the now healing hole in her neck, but her eyes bright and her enthusiasm boundless. She became a leader of the hunt, often being the one to return first with the Alpha male, both bloody necked from a successful kill, to regurgitate food for her mother, the Alpha female, and her new little siblings!

My oil paintings and sketches show Snare interacting before a hunt with her siblings, a symbol of the stamina and will that these dogs show in the face of adversity. She now had the strong potential to be a leader, an Alpha female with pups of her own in the future.

Read this link to discover the story of “Snare”, a Wild dog, and how she is linked to these fine wines!

Pictus III : The story behind the label | Painted Wolf Wines.

and other stories about wine and conservation….