Posted on August 3, 2015 by wineandwilddogs 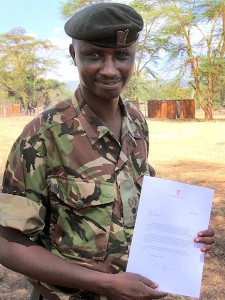 The Northern Rangelands Trust was established in 2004.

Tom stated that “Getting conservation to drive peace and conflict resolution in northern Kenya… has been possible by the support of the US Government through USAID” and urged President Obama to help crush the demand for ivory internationally. USAID are one of NRT’s biggest supporters.

Tom must be the only Samburu to have met and addressed HRH The Duke of Cambridge and US President Barack Obama in the space of a few months! Tom was in London in May to celebrate the Tusk Trust’s 25th anniversary, of which the Duke of Cambridge is a patron.

Tom is a Samburu from the West Gate Community Conservancy. While he could have followed in the pastoralist footsteps of his family and neighbours, it was with the support of his entire community that he completed his schooling and went on to receive a BA in social work and an MBA in strategic management at the University of Nairobi. Tom has ten years’ management experience gained from working with community-based organizations in Kenya and brings invaluable experience and skills to the Trust with his background in community development, conservancy management and fundraising. He was appointed as Community Development Assistant for NRT in April 2006, and since then has won the trust and respect of countless members of the diverse communities he works with. In September 2013, Tom was awarded the Tusk Conservation Award by the Duke of Cambridge at a ceremony in London, which recognised his outstanding contribution to northern Kenya’s communities and wildlife. Clive Stockil won the Prince William Award for a Lifetime of dedication to Conservation at the same time.

Lin Barrie The Save Valley Conservancy stretches along the upper reaches of the great Save River in the south east of Zimbabwe. The Gonarezhou National Park laps against the southern banks of the Save River and between these two nestles the Malilangwe Wildlife Reserve. These three celebrated wildlife areas form part of the Greater Limpopo Transfrontier Conservation Area, (GLTFCA)- a unique wilderness jewel which is home to the “Big Five” (endangered Black and White rhinos, elephants, buffalo, lion, leopard) and the ”Little Six” (Klipspringer, Suni, Duiker, Steenbok, Sharpe's Grysbok and Oribi). Endangered African wild dogs, Cheetah, Brown hyena, Bat-eared foxes and a host of special birds and plants contribute to the immense variety of this ecosystem. Communities around the GLTFCA contribute to innovative partnerships with National Parks and the private sector, forming a sound base on which to manage social, economic and environmental issues. This is home to artist and writer Lin Barrie and her life partner, conservationist Clive Stockil. Expressing her hopes, fears and love for this special ecosystem with oil paints on canvas, Lin Barrie believes that the essence of a landscape, person or animal, can only truly be captured by direct observation. Lin Barrie states: “Through my art, and my writing, I feel an intimate connection with the natural world, and from my extensive field sketches of wild animals, people and landscapes, I create larger works on canvas. Lin's work is in various public and private collections in South Africa, Kenya, Zimbabwe, Australia, England, Canada, Sweden and the United States of America. She is represented by galleries in South Africa, Zimbabwe, England, Kenya and Florida, USA.
View all posts by wineandwilddogs →
This entry was posted in adventure travel, Africa, African child, african wildlife, anti poaching, bio diversity, Black rhinos, community conservation, conservation, conservation news, Duke of Cambridge, elephants, endangered species, lewa conservancy, London, Northern Rangelands Trust, Prince William, Prince William Award For Conservation, Tom Lalampaa, Tusk Trust, tusk trust conservation awards, White rhinos, wilderness, wildlife trade and tagged Clive Stockil, conservation, elephants, poaching, President Obama, Prince William, rhinos, Tom Lalampaa. Bookmark the permalink.