Posted on January 24, 2015 by wineandwilddogs

As dusk falls, we sit quietly on the breakfast deck at Chilo Gorge…listening to the night sounds, enjoying the cool after a long, hot, rain-threatening day…

A bush baby tiptoes out of the dark, into the circle of light created by the garden lamps, and stares intently for insects before moving on.

All at once the begging sound we have been hearing but not really noticing invades our space as a young Wood owl lands directly  in the brachestygia branches above our heads, calling loudly for food! Just too dark for me to take a photo, but his shape is imprinted on my mind so clearly………here is a gorgeous photograph by  Nick Borrow, of just such a baby Wood Owl… 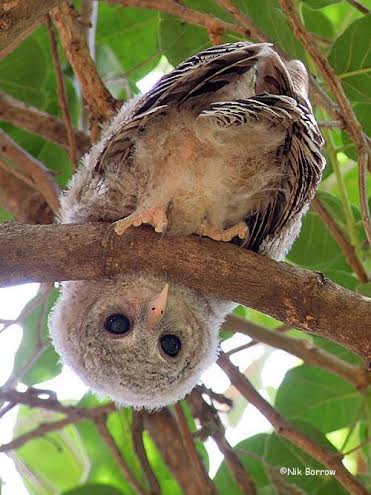 What a beautiful sight close up, soft round head , huge expressive eyes….and here comes Mum with a gecko, fresh – harvested from the thatch roof of the lodge, which she gives to the excited baby!

He pounds it all over with his beak, crushing it on the branch beneath his claws, then consumes it with great relish. The two adult owls join him, one eating a fluttering moth, mand we are treated to the lovely sound of the adults calling and the baby begging….

The three of them fly down to the seat backs of the poolside loungers, where they perch and watch for insects, him begging all the while….

This is the distribution of the African Wood owl… 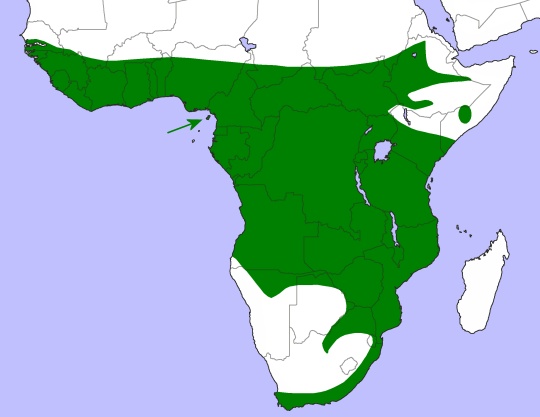 More information for those who wish….

The African Wood Owl is a medium-sized owl with a rounded head and no ear-tufts.

Description: There is some individual variation in general colouration. The facial disc is pale buffish-brown with darker concentric lines, shading into a dusky ring around the dark brown eyes. The eyelids and edges around the eyes are fleshy pink. The bill and cere are yellowish. The rest of the head and neck are dark brown, spotted white.

The mantle, back and uppertail-coverts are dusky rufous, with individual feathers having narrow white bars near the end, white shaft-steaks and buff vermiculations. Scapulars have white outer webs, forming a white row across the shoulder. The flight and tail feathers are barred light and dark.

The underparts are russet, densely barred whitish and brown.

Tarsi are feathered pale buff with pale brown bars. The toes are bare, and coloured yellow-horn. Claws are greyish-brown.

Habits: The African Wood Owl is a strictly nocturnal bird. It roosts during the daytime, singly or in pairs, in dense cover – mostly high in trees. Vocalisations begin at night, often singing from exposed perches such as the top of a tree. Adults have been known to feign injury as a distraction if a nest with young is threatened.

Voice: The song of the male is a loud, rhythmic sequence of clear hoots – “whubu-wububu-wubu”. This phrase is repeated at intervals of several seconds. The female has a similar higher pitched call with the first double not more drawn-out and followed by a slightly longer pause – “whuhooh wububu-wubu”. The female also utters a high “wheeow”, often answered by the male with one or more low hoots.

Hunting & Food: This owl feeds mostly on insects such as grasshoppers, crickets, cicadas, moths, caterpillars, and beetles, but will also take frogs, reptiles, small birds, small rodents and shrews. Most prey is caught from a perch, the owl normally watching its victim intently before swooping down on it. Also hawks flying insects in the air, and snatches small animals from vegetation while in flight.

Breeding: Each pair occupies a territory throughout the year, and is particularly vocal before the start of the breeding season. Normally nests in a natural hole in a tree, often where a large branch has broken off. Occasionally uses a stick nest of a larger bird, or nests on the ground at the base of a trunk or beneath a fallen log. The female lays 1-3 (usually 2) rounded white eggs (about 43 x 37.7mm) at intervals of 2-4 days. She incubates the eggs alone, starting with the first egg, while the male supplies the food. The incubation period is 31 days, and the young hatch at similar intervals to which the eggs were laid. Chicks open their eyes 10 days after hatching. The female broods them until they are about three weeks old, then leaves them unattended at night to help her mate bring food to the nest. At 23-27 days old, the young leave the nest, but are still unable to fly, and remain in cover nearby where they are fed by both parents. By 46 days they fly well, staying with their parents for a further four months before becoming independent.

Habitat: Forest, from the edge of primary forest to dense woodland. Also riverine forest and plantations. Ranges from sea-level up to 3700m elevation.

Lin Barrie The Save Valley Conservancy stretches along the upper reaches of the great Save River in the south east of Zimbabwe. The Gonarezhou National Park laps against the southern banks of the Save River and between these two nestles the Malilangwe Wildlife Reserve. These three celebrated wildlife areas form part of the Greater Limpopo Transfrontier Conservation Area, (GLTFCA)- a unique wilderness jewel which is home to the “Big Five” (endangered Black and White rhinos, elephants, buffalo, lion, leopard) and the ”Little Six” (Klipspringer, Suni, Duiker, Steenbok, Sharpe's Grysbok and Oribi). Endangered African wild dogs, Cheetah, Brown hyena, Bat-eared foxes and a host of special birds and plants contribute to the immense variety of this ecosystem. Communities around the GLTFCA contribute to innovative partnerships with National Parks and the private sector, forming a sound base on which to manage social, economic and environmental issues. This is home to artist and writer Lin Barrie and her life partner, conservationist Clive Stockil. Expressing her hopes, fears and love for this special ecosystem with oil paints on canvas, Lin Barrie believes that the essence of a landscape, person or animal, can only truly be captured by direct observation. Lin Barrie states: “Through my art, and my writing, I feel an intimate connection with the natural world, and from my extensive field sketches of wild animals, people and landscapes, I create larger works on canvas. Lin's work is in various public and private collections in South Africa, Kenya, Zimbabwe, Australia, England, Canada, Sweden and the United States of America. She is represented by galleries in South Africa, Zimbabwe, England, Kenya and Florida, USA.
View all posts by wineandwilddogs →
This entry was posted in Africa, african wildlife, beauty, birding, birds, eco-tourism, gardens, hunting, insects, owls, prey, reptiles, zimbabwe and tagged africa, African wood owl, animals, baby, Chilo Gorge Safari Lodge, eco-tourism, environment, gardens, gecko, gorgeous photo, Nick Borrow, owl, Strix woodfordii, the African Wood owl..., wildlife, Wood owl, zimbabwe. Bookmark the permalink.