Posted on January 24, 2015 by wineandwilddogs

Clive Stockil, through Tusk Trust, won the Prince William Award  for a Lifetime Achievement in Conservation in 2013…here he is at Chilo Gorge Safari Lodge with staff and the Award itself…..

We now congratulate Richard Bonham who has very deservedly won the Prince William Award for 2014.

Communities and Conservation go so strongly hand in hand… 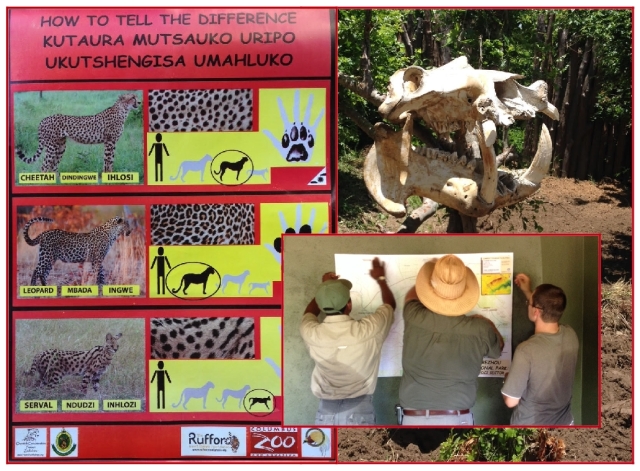 including  this Vulture poster by Birdlife Zimbabwe 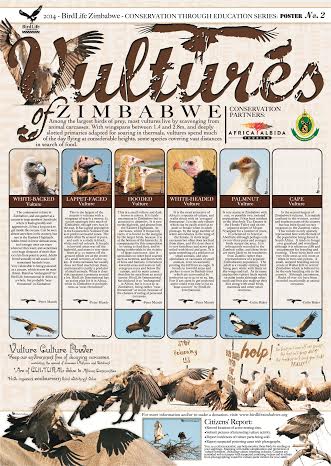 We see constant interaction between elephants and the Mahenye Villagers, and the National Parks rangers who man the Parks reception at Mahenye live daily with these animals…

Parks staff children and elephants at Tembahata Pan in Gonarezhou…

Elephants are our constant companions on game drives, mostly gentle giants who are a delight to observe in their true wilderness…here is fabulous ivory where it belongs..on live elephants!

Elephants, elephants…are as much a vital part of this ecosytem as people and rivers are… 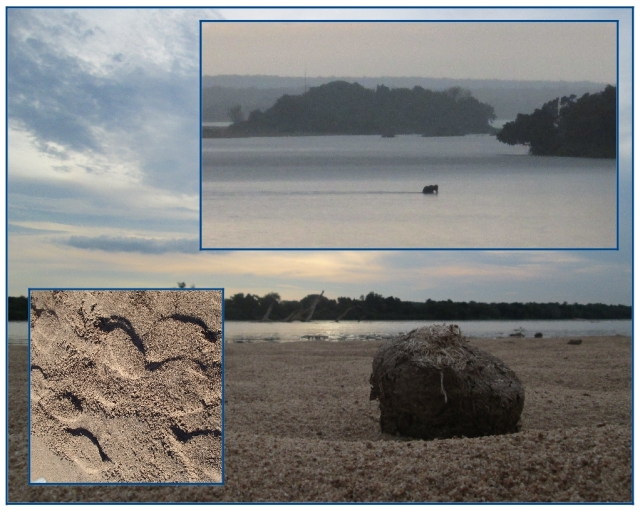 Elephants, and more elephants, in and around the Save River …..

Clive’s visions and hopes for real community conservation initiatives are reflected in this article:

Community and conservation meet tourism at Chilo Gorge…a win win for all. 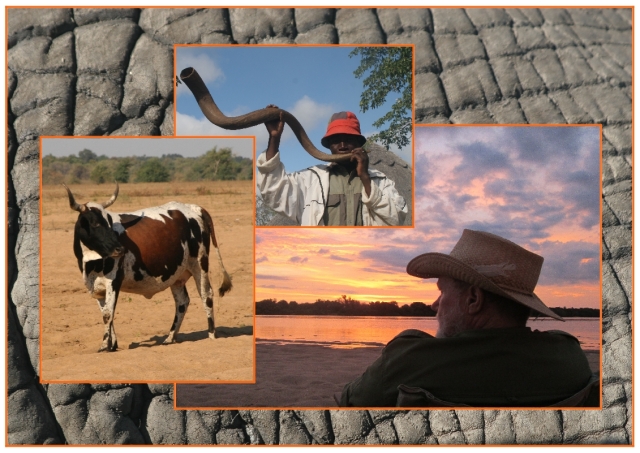 Clive and elephants, sunsets and community…

Chilo guides are truly deserving of the praise heaped on them by happy and fascinated guests who enjoy exploring the wilderness under their care….

The beginning of this year has seen a successful wetlands bird count at Chilo for Birdlife Zimbabwe, with fascinating sightings by guests and Chilo Guide Lionel Muzengi, of two very interesting predators:

Chilo kitchens, bar and waiter staff have produced memorable meals and cocktails, from Christmas mincemeat pies …in the rain…. 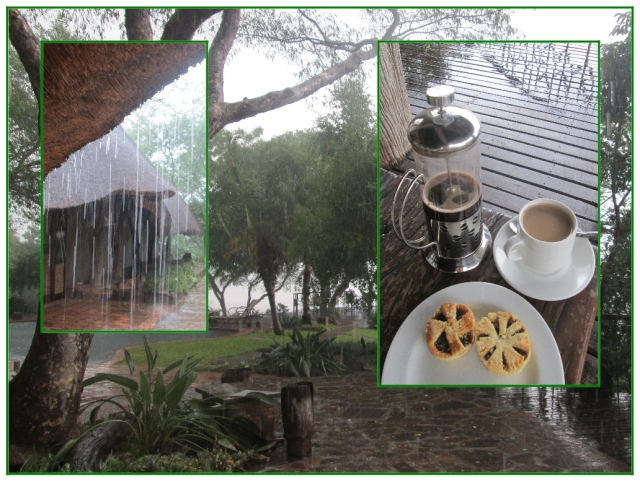 to the fabulous Baked Ham, salads and cold meats Buffett for Christmas and New Years Day, plus Black- Eyed Peas and Atholl Brose to bring the New Year in with good luck!

Continental breakfast on the deck is always a winner…. 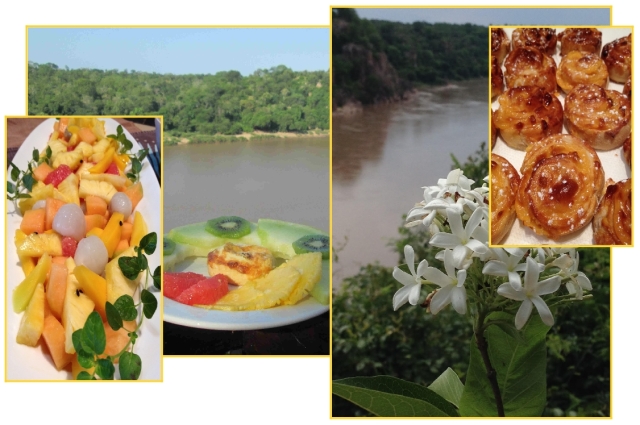 chilo breakfast on the deck

Datura flower on the beach of the Save River..

The Chilo gardeners have been hard at work maintaining the structure of the rocks and gardens that Arthur Barrie lovingly placed…the elephants providing a constant challenge! We have learnt which indigenous plants the  naughty elephants relish, and those are not being replanted!

Chilo housekeeping have kept the rooms beautiful, with  scented herbs in the bathrooms and flowers on the bedcover in the honeymoon suite.

The Save river is a huge snaking waterway, a roiling python curve of water that is bursting its banks, driving even the largest crocodile to climb out and rest on the grassy banks to avoid being swept away! and the pans are inhabited by frogs and various waterlilies… 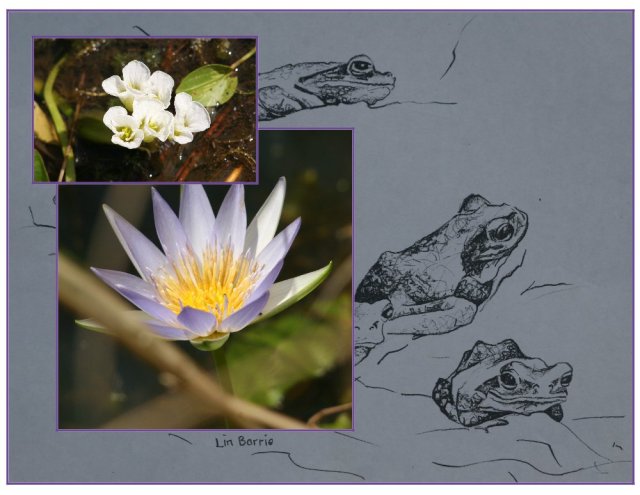 The rainy season in the Lowveld has brought a flooded Save River, baby animals galore and abundant flowers, and we have shared valuable time and knowledge with Bart Wursten and Petra Ballings in the field….Chilo Gorge and surrounds will have a botany page in their excellent website, Flora of Zimbabwe…

Crossandra, one of my annual favourites…

chilo in the wet season-Crossandra and a funky cicada…

Purple Vitex flowers carpet the pathways, and teeny tiny  flies that sit on them, looking  like shrimps, are a miniature joy…… 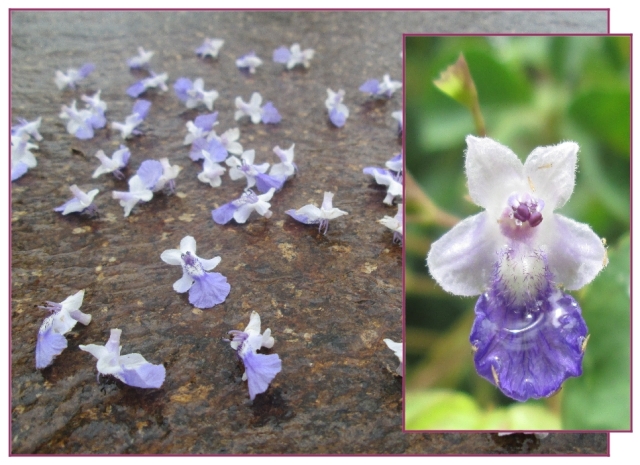 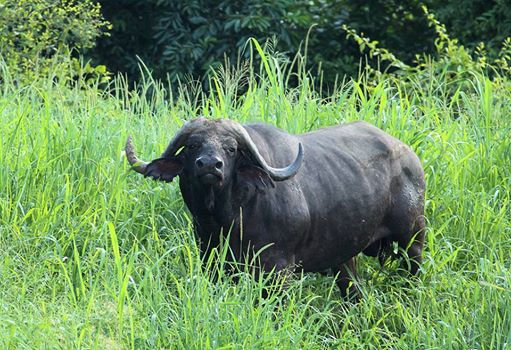 Watch this space for my artistic interpretation of the buffalo bull- my memories of facing him in the field are powerful….!

Birds abound and we get regular flyovers of those special little birds, Brown headed parrots, and the larger endangered Grey headed parrots…

Now as the rains seem to be tailing off, the Save river subsides and the Chivarira Falls subdues its constant roar of muddy water….

Cheers to the rest of 2015, from the awesome Save River……